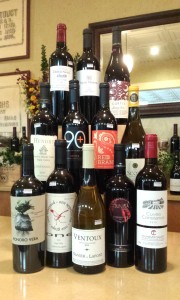 Are you a fan of big wines? And by big wines, I mean wines that you’d pair with a grilled ribeye, or a spicy bowl of chili con carne, or some ultra-pungent blue cheese? Then this Saturday’s Ridiculously Big Wines Tasting is for you. Here’s a little bit of background on each wine we’ll be pouring:

A blend of Grenache Blanc, Clairette, and Bourboulenc, this full-bodied white is fruit-forward with citrus, peach, and subtle floral notes.

This California beauty is produced from vine clones from Dijon, the birthplace of some of the Burgundy’s most prestigious wines. Full-bodied with notes of apricot and tropical fruit, this wine is oaked, but not overly so; 8 months of sur lies aging in French oak impart a subtle creamy vanilla note.

Produced by Gil Family Estates, the folks behind Ateca, Juan Gil, and the highly-rated Clio, Honoro Vera 2013 Monastrell is made from 100% organic grapes from the northwest of Jumilla. The wine is dark, rich, and aromatic with notes of ripe berries, fresh herbs, and a hint of peppery spice.

Closer to black than to red in color, this well-aged, perfectly balanced Montepulciano d’Abruzzo defines “big.” Pronounced notes of ripe berries, dried flowers, and pleasant spice are rounded out nicely by 12 months of oak aging and an additional 12 months of bottle conditioning.

Part of a highly limited release of 322 cases, Redd Brand Syrah is a blend of 95% Syrah and 5% Mourvedre. This hearty Washington state red is described by the winemaker as vibrant and muscular with notes of blueberry, smoked game, cassis, and lemon peel.

2005 in Bordeaux is widely regarded as a spectacular vintage, and the Château Fougas Maldoror 2005 is certainly no exception. Complex and layered with notes of blackerry, cassis, and cedar, this wine is drinking beautifully, but will continue to develop with age, if you can resist opening it now!

Hailing from the Côtes du Roussillon AOC, Domaine Thunevin-Calvet Cuvée Constance is a blend of 50% Grenache and 50% Carignan. The wine has been aged for just over a year in concrete tanks, rather than oak, allowing for bright, fresh, pronounced fruit character and hints of stone and minerality.

This classically huge California red blend is made up of 30% Merlot, 23% Petit Verdot, 17% Zinfandel, 16% Petite Sirah, 10% Syrah, and 4% Malbec. The result is a hefty yet smooth wine with hints of cherries, blueberries, black currant, and vanilla, along with some woody undertones, thanks to careful aging in French and American oak.

California’s 2011 vintage was a tough one; rainfall was lacking, so yields were considerably lower than in previous years. But that didn’t stop Hope Family Wines from creating the standout Liberty School 2011 Merlot. Fermented in stainless steel and aged for 12 months in 50% French and 50% American oak, this dark, silky red is fruit-forward and well-structured with notes of dark plum, cherry, and bright, ripe berries.

Having featured their 2010 Mourvedre in a previous tasting, we’re already big fans of Curtis Winery. Their 2012 Cuvée Red is a blend of 39% Grenache, 26% Mourvedre, 19% Cinsault, and 16% Syrah, resulting in a rich and smooth Rhône-style wine with notes of black currant, warm spice, and a long finish.

Since we enjoyed the Liberty School 2011 Merlot so much, we decided to feature another wine from Hope Family Wines. The Candor Lot 5 Zinfandel is a blend of several of their best vintages, which results in the perfect expression of the California Zin – robust, jammy, and smooth with lots of berries and a hint of spice.

If you’re not familiar with 90+ Cellars, you’re in for a treat. This Boston-based company buys the unsold wines from top-rated wineries, rebrands them with their own label, and sells them for a fraction of their original price. Boasting notes of dark plums, substantial spice, and a hint of vanilla on the finish, the 2013 McLaren Vale Shiraz is a veritable behemoth of a wine, and a perfect example of the style. You’ll be glad this one arrived just in time for barbecue season.

And that’s the lineup, as it stands – to taste any or all of these wines for FREE, stop by this Saturday anytime between 2 and 7 p.m., and tell as many of your friends as you can! As always, this lineup is subject to change, but that just means there might be a few pleasant surprises on the way.